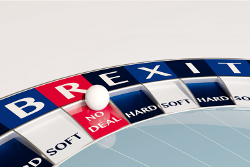 More than three years after the unexpected Brexit vote of June 2016, there is still no exit agreement between the United Kingdom and the European Union. Although the conditions of Brexit and the corresponding economic consequences are still unknown, the referendum has already had a real economic impact. The long discussion surrounding Brexit can be seen as a long-lasting uncertainty shock, whiach has affected firms’ investment decisions.

In this note we use highly detailed customs data before and after the vote to measure the impact of Brexit on French firms’ exports to the UK. We find that the referendum had no effect on average on the value of exports but depressed export growth in sectors such as transportation or chemical industries which are more upstream in value chains. The number of new trade relationships involving French exporters and British importers has significantly declined after the Brexit vote, in comparison with other destinations. This is consistent with the uncertainty shock reducing French firms’ investment in their customer base, which is likely to penalize French exporters in the future. These results are suggestive evidence that uncertainty has a real cost and that any decision of delaying the Brexit further should compare the benefit of reaching a better deal with the economic cost induced by uncertainty. It is also important that the next EU-UK trade agreement should guarantee the stability and predictability of the trade policy that European exporters will have to face.