From Guangzhou to Naples: French exports of plastic waste 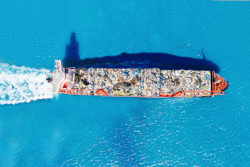 From Guangzhou to Naples: French exports of plastic waste

In this note, we use China’s ban of plastic waste imports in 2017 as a natural experiment of a sudden drop in the world demand for plastic waste. We study how French exporters have adjusted, both in terms of quantities exported, destinations, and prices. After the ban, exports to other Asian countries increased sharply, but this redirection appears to be short-lived, unlike redirection towards other EU countries. In addition, there is suggestive evidence of a polarization of the quality of plastic waste exports between destinations. In light of our findings, we discuss the possible impact of new European regulations that will drastically reduce European exports of plastic waste.

The authors gratefully acknowledge support from the Investissements d’Avenir program (ANR-11-IDEX0003/Labex Ecodec/ANR-11-LABX-0047), the European Research Council (ERC) under the European Union’s Horizon 2020 research and innovation program (grant agreement No 714597), and the UQAM research Chair on the local impact of multinationals.