Fighting inequalities from early childhood: A large-scale evaluation of the Parler Bambin program 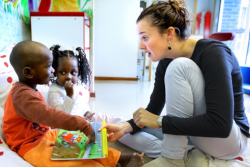 Acknowledgements:
The authors thank ANR, ARS Auvergne-Rhône-Alpes, Cnaf, Bellon Foundation, France s’engage, Labex Aslan and University of California Santa Barbara for their generous support. The authors also thank the valuable work of the investigators and psychologists for all the data collected in this evaluation. Finally, we would like to warmly thank all the daycare centers and their managers for their participation and their welcome.

Fighting inequalities from early childhood: A large-scale evaluation of the Parler Bambin program

When children from an underprivileged background enter school, their average language skills are poorer than those of children from an affluent background. This disadvantage will penalize them in their learning during their schooling, increase their risk of dropping out, and have consequences on their future quality of life. However, a lot of research shows that this situation can be corrected in early childhood, for example by introducing high-quality educational programs in daycare centers. The Parler Bambin program aims to train childcare professionals to strengthen their knowledge and everyday practices in the area of language and language interaction, and thus improve the language development of young children. The program aims to reduce these early inequalities in language development, with the hope of ultimately reducing educational and socioeconomic inequalities.

This study evaluates the effects of the Parler Bambin program on the practices of professionals and on the development of children. To do this, we conducted a large-scale randomized evaluation in 94 daycare centers in metropolitan France, following children from disadvantaged families. We worked with these childcare centers for three years with the aim of estimating short- and longer-term effects.