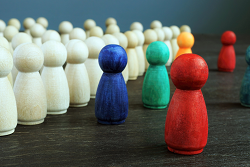 Unemployment insurance was originally designed to limit income losses in the event of unemployment, not to correct unequal pay in the labor market. Thus, unemployment benefits are proportional to past wages, and the length of time that unemployment benefits are paid depends on the length of time spent in employment. In this policy brief, we consider how closely unemployment insurance adheres to this definition in practice. In particular, we show that beyond its insurance role, it has gradually become an instrument of redistribution, breaking with the idea of proportionality between contributions and the entitlements they create, and transferring resources between income levels. This change comes from the increasing segmentation of the labor market in which part of the active population alternates between short jobs and compensated unemployment.