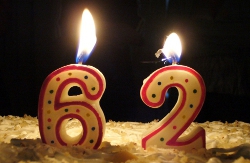 An important feature in the debate on French pensions reform is whether or not it is necessary to keep a reference retirement age in the new system. This brief aims to contribute to the debate by clarifying certain ambiguities about the concept of retirement age and by discussing the potential implications of implementing a points system. We stress the difference between the impact of reference ages in the current system – those ages changing the pension scale of the system – and implementing reference points in the new system, such points playing a useful part in informing the future pensioners. Recent economic literature has highlighted the part played by reference points in pension scales, beyond providing purely financial incentives. This would argue in favour of the new system keeping a target to which the future pensioners can refer. Rather than a single pivotal age for everyone, this brief advocates introducing a reference norm that is defined by obtaining a target replacement rate, e.g. 75 % of the last salary before retirement. Such a reference would lead to dening an individual full-pension age, adapted to each career. This would also be a return to the initial goal of a pension system, namely to maintain standard of living on retirement. Such an age reference could also be accompanied by new services for helping future pensioners prepare their retirement choices better..