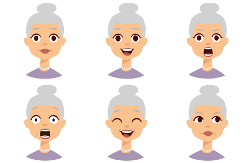 A consequence of the French pensions reform whose aim is to establish a universal pension system having defined yield and operating on a points basis will be to reinforce the contributory nature of the formula for calculating pensions. Whereas in the current system the contributory core has counter-redistributive effects – increasing the pensions inequality relative to the salaries inequality – the new system would become neutral and the reform would thus lead to a reduction in pension inequalities. The reason for this counter-intuitive effect – i.e. the effect whereby making the system more contributory reduces inequalities – is to be found in the corrections made by implicit mechanisms in the current system, such as the rules of taking the 25 best years or of revaluating the salaries included in the pensions calculation in line with inflation. Abolishing the rule of number of years of contributions in the pensions scale would also reinforce this effect by being more beneficial to individuals who have had low mean salaries. In this policy brief, we show these effects based on simulations conducted on the population of employees in the French private sector. In addition to individuals on low salaries, women would also benefit signicantly from this change in the calculation formula..