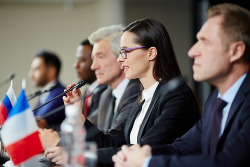 The under-representation of women in politics is a widely shared observation, but the reasons for this under-representation are still imperfectly understood and are the subject of much debate. Among the possible explanations, the hypothesis of voter discrimination against women is frequently proposed but rarely substantiated. This study attempts to test this hypothesis in the case of France. For this, we exploit an unprecedented natural experiment that took place in France in March 2015 as part of the departmental elections. For the first time, candidates did not stand alone and were instead obliged to run as equal pairs, composed of a man and a woman. The law also required that the order of appearance on the ballot be based on alphabetical order, which led half of the pairs to have a woman in first position and vice versa. This historic change in the electoral process may have led some voters to pay more attention to the candidate in first position on the ballot, thinking that this candidate would receive more prerogatives than the one in second position. This reform constitutes an ideal analytical framework for assessing the presence of gender discrimination and analyzing its determining factors: by comparing the votes received by pairs with a woman in first and second positions, and insofar as the gender of the first candidate is random, we are able to precisely identify the existence of voter discrimination against women. Finally, we identify substantial discrimination towards female candidates affiliated with right-wing parties, which affected the outcome of the election. The reference study also shows that the gender bias of voters depends not only on the amount of information available on ballots, but also on existing discrimination in the local labor market.