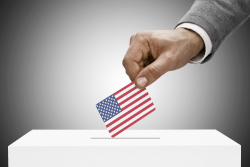 The system according to which the President of the United States of America is elected, the Electoral College, has often raised concerns. Among those, the winner-take-all rule is often criticized for potentially – and in recent years effectively – bringing to power a president who has not obtained the majority of the popular vote. This note shows that most of the reform proposals have failed due to the structure of the problem: the US Presidential Election is trapped by the Prisoner’s Dilemma. Each state would rationally choose the winner-take-all rule in order to best reflect its citizens’ preferences on the federal decision. However, the outcome of such a choice, if adopted by all states, would not be desirable for the nation as a whole, because it prevents the optimal aggregation of all citizens’ preferences. A weighted proportional rule, if used by all states, would make all citizens better off by reflecting their preferences on the final decision more accurately. However, since each state has an incentive to adopt the winner-take-all rule regardless of the choice of the other states, it is impossible for all the states to adopt such a rule without a coordination device. We therefore analyze interesting attempts to escape from this dilemma, such as the National Popular Vote Interstate Compact, and how our framework applies to representative democracy.