Female Role Models: are they effective at encouraging girls to study science? 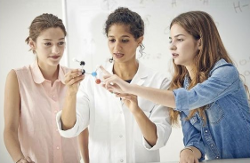 Female role models: are they effective at encouraging girls to study science?

In France, as in most developed nations, the under-representation of women in the sciences is a major obstacle to achieving equality in the workplace. Since 2014, the For Girls in Science awareness programme run by Fondation L’Oréal has offered one-hour classroom talks by young women with a science background (women working for the L’Oréal group and young researchers). These talks aim to combat the stereotypes associated with science-related careers and with women’s role in the sciences, in order to make science more attractive to young women. Using a random assignment evaluation protocol on nearly 20,000 pupils in seconde (Year 11) and terminale scientifique (Year 13) year groups at French high schools in 2015-2016, we show that these one-hour talks lead to a significant reduction in pupils’ stereotypical representations of science-related careers and gender differences in scientific ability, among both girls and boys.

Although the talks have no discernible impact on choice of educational track for all pupils in seconde and for boys in terminale S, they have significant effects on the post-baccalauréat track choices of girls in terminale S, for whom the proportion choosing a preparatory class for the most prestigious universities (CPGE) in a STEM subject rose from 11 to 14.5% (a 30% increase). One of the lessons learned from the study is that the ability to influence young girls’ career choices depends not only on how effectively the female role models bust the stereotypes associated with science-related careers and gender roles in science, but also on the type of identification engendered by exposure to the role model.