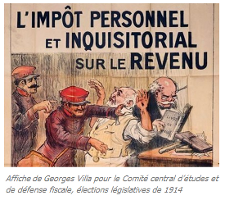 Since its establishment by the law of July 15th 1914, the French income tax (impôt sur le revenu) experienced many changes and sparked many debates. It relies on two funding principles: the declaratory dimension for all categories of income at the tax unit level and the progressivity of the tax schedule. The end of tax schedules differentiated by income types (impôt cédulaire) in 1949 and the creation of the family quotient gave the French income tax its contemporary form. From the after-war period to 1980, income tax receipts increased to reach 5.6% of GDP. Between 1914 and 1986, the top marginal tax rate generally exceeded 60%. After this period, the decreasing number of tax brackets, the fall of the marginal tax rates and the introduction of “tax reductions” led to the decrease of income tax receipts as a share of GDP. This decline did not go in hand with a decrease of the overall tax burden in France but was rather compensated by the increase of other taxes, such as the “generalized social contribution”, another income tax, introduced in 1991 with a larger tax base and flat rates.