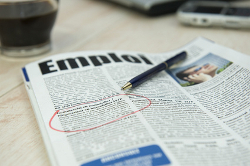 Motivation : In France, like in many countries, job seekers have the possibility to cumulate the income from a part-time job with some of their unemployment benefits, provided that the number of weekly working hours does not exceed a certain threshold. More than 40% of French job seekers registered at Pôle Emploi (the French Public Employment Agency) have indeed a part-time job. The net effect of working part time is ambiguous. On the one hand, a part-time job allows the worker to maintain and develop her skills, and to enhance her network. On the other hand, the time she can dedicate to finding a full time job is mechanically reduced. Part-time jobs are also often low-skilled jobs, so that the positive effect of work on skills may not be strong.
Existing evaluations get to the conclusion that those jobs have ambiguous effects, both on French data (Granier and Joutard, 1999; Fremigacci and Terracol, 2013) and European data (Kyyra, 2010; Caliendo, Künn and Uhlendorff, 2012). The main difficulty in evaluating those schemes lies into the creation of a credible counterfactual. Job seekers who work part time are likely to be very different from those who do not in terms of unobservable characteristics and these characteristics also determine access to full-time jobs.

The project: This research project is twofold. First, we will identify from historical datasets how the degree of information about the legislation about part-time work for job seekers has varied over time. Then, we will compare two groups of job seekers: those who had a high level of information, and those who had a low level. The differences in the extent to which they work part time will allow us to identify the effect of part-time work on finding full time job and staying unemployed.

Funding : This project is financed by Pôle Emploi.