How do we combat gender inequality?

While women today are as likely or more likely to have degrees as men, they are still disadvantaged in the labour market vis-à-vis their male counterparts. Understanding the causes of such inequality between men and women is a precondition for the implementation of effective public policy to counter it. 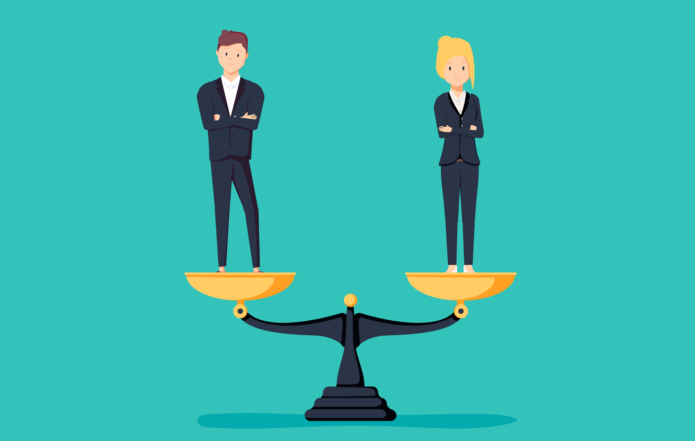 Women today have on average more degrees than men, but their monthly salary is 24.5% lower than men’s. The gender segregation between the scientific and humanities fields explains almost one third of the salary differences: all things being equal, girls are half as likely to choose a scientific field than boys. The under-representation of women in these areas that lead to management positions does not seem to be the result of explicit discrimination and seems to benefit those women who choose to go into disciplines that traditionally have been male dominated. The prevalence of stereotypes and certain social norms seem to be the main causes of women’s under-representation.

All things being equal, girls are half as likely as boys to choose a scientific field of study

The taxation and social security systems, because of differences in life situations and behaviours, can also be sources of gender inequality. For example, family rights in the current pension system do not compensate women for their career hazards, and the organisation of social time, especially school hours, influences women’s labor supply and potentially aggravates inequality in the labour market.

Promoting women’s access to jobs and functions traditionally reserved for men can in part be done through coercive measures such as quota policies. However, to ensure diversity over the long term and in healthy conditions, we must first eliminate the gendered stereotypes that describe certain trades and professions as more suitable for men or for women. The work of the IPP disrupts such received ideas, showing that the feminisation of firms and their management has positive effects on well-being at work and is in no case associated with reduced economic performance. Being proactive at the moment when individuals are making decisive choices about their career direction can also be effective.

Awareness-raising steps taken over the course of a pupil’s schooling significantly reduce the prevalence of stereotypes associated with women and encourage young women to pursue scientific careers. An intervention by a woman scientist to senior high school students increases by 30% the share of girls who enrol in selective scientific courses the following year. Finally, if reforming certain elements  of our taxation/social security system is required in order to establish gender equality then designing policies that aim to reduce ex ante career hazards (increasing childcare places, extending paternity leave, and the like) is probably more effective than those that introduce ex post compensation measures (such as supplementary pension benefits). 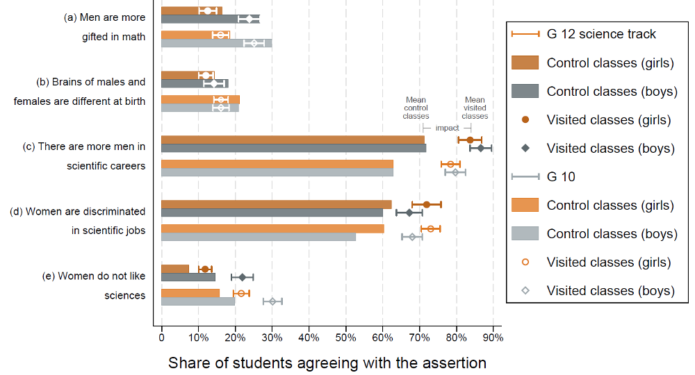 Note: The graph compares student perceptions of gender differences in the sciences in the 2015-16 school year – by class (Grade 10 or Grade 12 Science track) and by gender. The horizontal bars indicate the proportion of pupils who say they agree with the statement concerned in classes that did not receive the intervention of a woman scientist. The dots indicate the percentages seen in the classes that were visited by a young woman scientist. The impact of the programme is measured by the difference between the averages observed in the visited classes and the control classes. The confidence intervals of 95% are represented by horizontal T-shape bars.

Source: Study by questionnaire conducted in 2016 as part of the evaluation of the “For Girls in Science” programme.

In order to summarize these different measures of gender pay gaps, the IPP is launching a new online tool that allows users to make their own methodological choices and to visualize in a few clicks the evolution of pay gaps over the long term according to different modalities and in different groups of employees and companies. https://inegalites-femmes-hommes.ipp.eu

Are girls discriminated against in the Sciences? Lessons from the ENS competitive entrance exams

A helping hand for girls? Gender bias in marks and its effect on student progress

Pension reform: towards an overhaul of family rights